Just 1 mini today, so nothing too big. Guess that gives me a little more space to discuss the team in general.

I went with red for the ball versus the traditional brown. Partially to differentiate between the two Thrower models that will be available to the team. 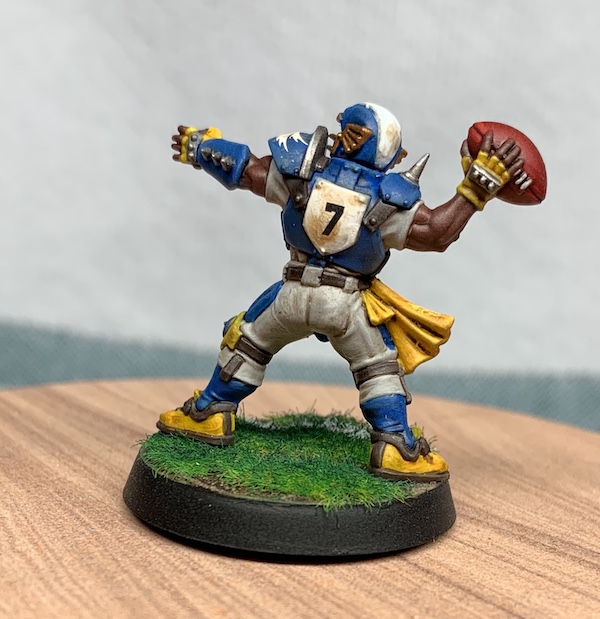 Last time around I mentioned an issue with the colors. So, here’s where I do some explaining.

I bought about a half team of Blood Bowl Humans off of Ebay that were already painted. It looks like the previous owner had pretty much completed them. Though I didn’t see any highlights on the dark brown.

It was a nice find, as the paint job was good and it gave me enough minis to basically play Blitz Bowl. Was also interesting for me to see how other people paint things as well. I was pretty new to GW minis and techniques at the time, and it gave me a bit of reference. Now I’m a complete master painter…ummm, not even close…now, I kind of have some tools under my belt and am comfortable with the basics. Even if I don’t always implement them as well as I would like. But it’s enough to get some decent looking minis on the game table, and that’s my main goal.

So, with a handful of painted minis “All, I have to do is paint the other half of the team!”. Umm yea, not quite as easy as I had thought.

Basing was a bit of an issue, as I typically glue a washer to the bottom for weight and magnetic storage. Add a small amount of putty to fill the hole and add some more weight. Then prime the whole thing black. So, to do that with an already painted mini, does pose a bit of a challenge.

The next part was matching the colors. Most of the minis were likely painted with the usual GW paints, and were easy enough. The grey clothes though…I couldn’t figure out for the life of me, how exactly they had painted those. It was a sort of weird bluish-grey with maybe brownish wash. I tried various combinations of grey and different washes. I had skipped Grey Seer, because I didn’t think it had been released at the time that I purchased the minis…but for whatever reason, that plus Agrax Earthshade was the closest I could get to matching the color. Maybe they used some non-GW grey, who knows. All I know, is that it took 3-4 days for me to get close enough to a match.

Blood for the Blood God. A bit too much on the minis for my taste, so I did my best to clean some of that up. Really tricky to do on static grass. So I tried ‘glopping mud’ over the blood stains. Speaking of static grass, I also painted that to a darker green too.

Not horrible, but not particularly easy.

Then there was the color choice. They had used the basic GW model scheme for the team, which I wasn’t too crazy about. But they also switched colors on some models. Some had red boots, pads, gloves and others had yellow boots, pads, gloves. It adds some variation to the team, especially with the different sculpts, but it seems a tad odd to me.

And that’s the background. Since I didn’t have to paint the whole team, there will be slightly less minis to showcase overall. I’ll probably include the pre-painted ones in a future team shot though.