In the interest of getting Necromunda played, I’ve started on the team of miniatures chosen by my son, the “Van Saar”.

Not an earth-shattering post today, mainly focused on getting a paint scheme sorted out for the Van Saar gang.

I looked at Games Workshop’s paint tutorial for the Van Saar. I then bought the base paints they used, and then promptly decided I would try something different! Partially because I had painted the Goliath gang using GW’s paint scheme and wanted to diverge, but also because I had other ideas in mind.

Here’s some quick images of what they have looked like over the years. 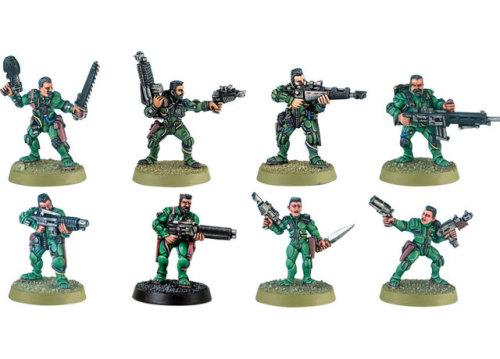 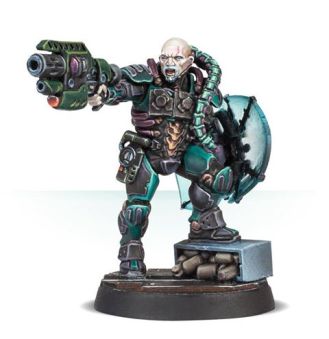 The gang itself is a bit militaristic and the makers of fine guns. This lent me to thinking about a military style paint scheme, of greens and browns. Throw some bits of high tech in there as well.

Enter the Test Strips. I’ve mentioned this before (https://doubledowndice.wordpress.com/2018/04/17/tool-tips-11-test-strips/), but this has been a really nice way to get a quick paint scheme worked up without having to paint an entire mini.

I’m really glad that I didn’t paint up the gang using that first color scheme. Even after a wash, it ended up being pretty bright. Being a comic geek, it reminded me too much of Lex Luthor’s Powered Armor suit too, and I know I wouldn’t be able to get that out of my head. 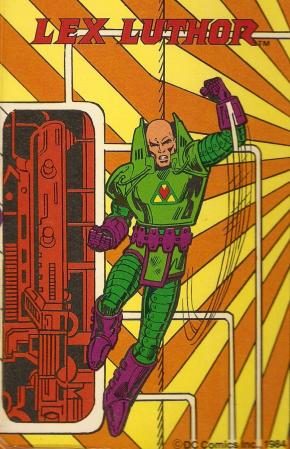 So I opted for more drab green with some brown tones. I looked up a lot of different images online to get some ideas, everything from color schemes used on Cadian miniatures, GI Joes, Alien/Aliens, Starship Troopers, etc. Ultimately the colors used on Boba Fett in Star Wars really spoke to me. Grey, green, brown. I tried out a few combos, and even tried just green on green. Green on top of grey, with some khaki under-armor won out. Though I had to darken the Khaki with wash considerably and it almost makes me think I should have gone with a slightly darker tan. The ‘cyber’ parts I opted to do in purple. Not 100% sold on that idea, but it seems to work okay.

I wanted to paint the gun green like GW did on the latest models, but doubt it would look right next to the already green armor. Agony set in, and I ended up asking my brother. He suggested the black/silver with red accents. That seemed decent enough, so I gave it a go. I think that turned out pretty well, especially with the parts he recommended accenting. This will also serve a dual purpose in helping to differentiate two very similar guns from each other. I’ll paint one with red accents, and the other with a different accent color.

The flesh was another consideration, as the Van Saar are supposed to be weakened by radiation sickness, according to the new lore. So I needed to go fairly pale. GW’s paint scheme starts with a base of Rakarth Flesh. Never tried it, but might as well give it a go. Great stuff! For a pale skin tone, it worked pretty nicely. I almost didn’t apply a second coat, as the grey underneath was really adding to the pale effect. Still looks good even with the second coat though, and a thin wash of Reikland Fleshshade gave it some nice shading. I’ll be keeping this paint in mind for the next time I need to do a nice pale skin tone (hello gingers!) again. Also I should probably mention that the mini itself had a nicely sculpted gaunt face, making things pretty much a breeze.

Similar idea for the hair, make them look not so healthy. My theory is that the minis without the helmets might be the veterans, and with the radiation sickness, they might all look a little older than they actually are. Mournfang Brown as the base, wash with Agrax Earthshade. Pick out some parts with Skavenblight Dinge. Add some additional grey streaks, with Dawnstone. This ended up pretty decent for some dulled, and grey striped hair. I might apply one more wash, but will see.

I’m not completely finished with highlights, but this is where the mini is at right now. Note: the cyber ponytail and shoulder pieces still need to be painted up and attached. 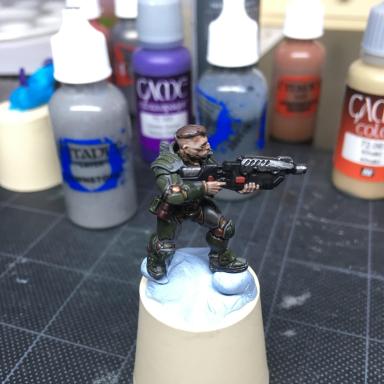 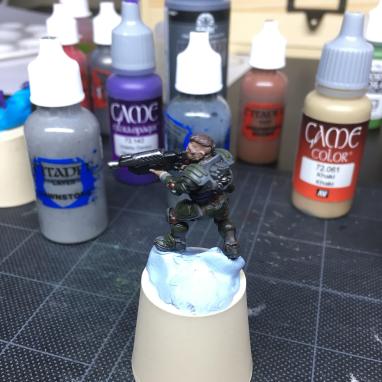 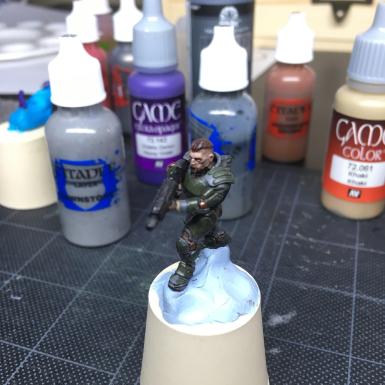 My one lament about this piece, is that the weather has not been kind. I’ve had the ceiling fan going non-stop for days. Which doesn’t help with paint drying out but also I’ve had to continually pick bits of lint, etc. off the mini.

The wash seems a bit stickier than usual, and (in the pic below) is pretty dark in some spots. Not sure if this was an effect of hot weather or what, but the unevenness is a little annoying. 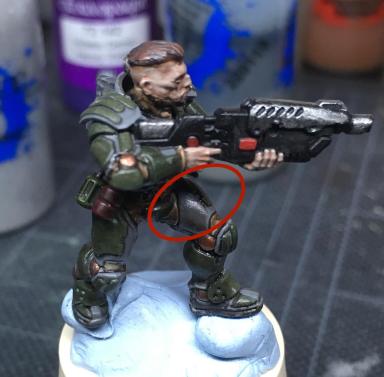 Flesh:
Rakarth Flesh as base
Reikland Fleshshade wash
I haven’t gotten to the highlights yet, but likely Rakarth Flesh and Flayed One Flesh mix (50/50).

Highlights:
So far have only applied grey highlights
Grey: Dawnstone

One mini close to being done! My highlights tend to be pretty light, so I don’t know if there will be a huge difference in the finished mini.

Painting wise, these have been fiddly. Painting the edges of those green plates, at less than 1mm thickness, was a chore. Though looking at the mini now, it seems the wash covers the edges, so maybe I didn’t need to do that? The other fiddly part is having to figure out what color goes where. I had to print out a couple pics from online to use as reference. Those got used quite a bit. Now that I have a nearly finished model, I’m hoping that won’t be as bad now. I can also try and work on 3 models at a time, which will hopefully speed things along.

After a long time, I’m on the home stretch of getting the ‘prototype’ done. Feels pretty good to get him mostly glued together and painted. Though it still feels like I’m far off from having a team of them done. I think I’ll be more excited as I get more of them painted up and I start to realize that we will finally be able to play Necromunda with some painted miniatures.

Thanks for checking it out!