In short, I got hooked into the 2017 Necromunda release. I bumped up the Goliath gang miniatures from the boxed set in my painting queue. Last time around (in part 00), I talked about my concept for the gang and essentially everything up to the actual painting part. Which is where Part 01 begins….

The models are a little smaller than the Blood Bowl minis I am accustomed to, so I had to get used to the finer detail size. They are also more complicated to put together. However, having put together a Necromunda ganger from Orlock and Van Saar now, the Goliaths don’t seem as hard anymore. It seems that the models Games Workshop (GW) puts in their boxed sets are easier to put together and paint, than their later team sets. Though with the Van Saar gang at least, I see that it’s much easier to pose them than it would be with the Goliaths. The complexity is a trade-off with the multi-part-gooey-goodness.

The three that I finished up so far, went together okay. I actually fully assembled the guy (below), and it was easy enough to paint him assembled. The others I partially assembled, base painting and then shading all the bits before gluing them together and finishing up with highlights.

You can see that I labelled each one with the GW name, as I didn’t want to lose the individual parts to the model.

Honestly, I mainly followed the YouTube video from Warhammer TV:

The major difference is that I primed using “Stylnrez Grey Airbrush Primer”. It’s a primer, that I really love. After that I applied an all over wash of Agrax Earthshade. Being Necromunda, I wasn’t worried about things looking too dirty, so the wash is just fine and helps with differentiating the light and dark areas. I also used my own mix for the flesh, and used Vallejo Game Colors for the heads of the grenades. Full list of paints at the end.

Things did get a little chaotic along the way though, as we had various things going on at home. I ended up painting one model more thoroughly than the others, and forgot which steps I was on at a few points. The flesh on one is a bit different than the others because of this. On some of the models I also couldn’t tell if I applied a weak Agrax Eathshade wash over the paint or none at all. So there are some overall discrepancies.

I also screwed up on the flesh. Originally my vision was a “fake tan”/80s Muscle Magazine look for the Goliaths. Yea, they didn’t come out that way. They lean more towards the ‘sun starved’ look of a Hiver, especially with the stark lights of the new photo booth. Live and learn. 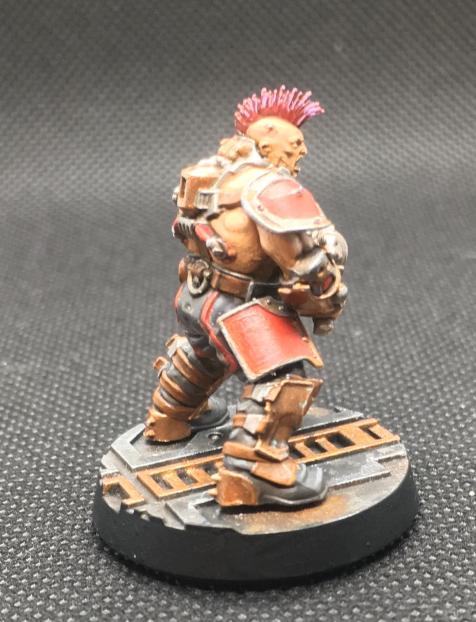 I find this silly, but I haven’t painted GW guns before, and I wasn’t sure what to do with the barrel tip. Looking at the pics of their models online, the barrel tips look to be drilled out slightly. I tried that, but either the hole was off center, or in one particularly bad case, split the gun barrel and I had to glue it back together. Seems like there is probably an easier way?

I might not feel like I was super creative with the paints, but from a technical standpoint these are some of the best minis I’ve painted to date. Definitely good enough for the game table. A lot of the little details, like eyes, can’t even really be seen unless you’re holding them up close. Almost makes me think getting too detailed was a waste of time, but having done it, I will likely continue the practice across teams.

Technically I met the ‘3 unit’ criteria for JUNIT (Azazel’s June Miniature Challenge). So even if I really get in a horrible time crunch, I could still submit these. But my plan is to finish 3 more gangers before the end of the month. I think it took me me about 3 weeks to finish these, though some of that was time spent priming and other stuff. It feels like a safe bet that I can finish up a 6 man gang for Necromunda by the end of the month.

All in all, super nice to know that I’m really close to having the gang done and a fourth of the way towards starting a small Necromunda campaign with the teenager.

You can see that various bits were painted differently. For instance, chest plates are sometimes all metal (leadbelcher), but sometimes Mephiston Red with Leadbelcher trim. Same goes with any armor plates, shin/forearm guards, etc. I opted to switch things up (just like the examples on GW’s product page), just to keep things interesting. So wherever I reference “bits”, it’s a piece where I’m varying the colors between models.

My order for applying the paints ended up a little differently than Duncan’s. I feel this worked better, allowing me to tackle smaller, harder to reach areas and then fixing up any mistakes with the next coat. A prime example is the piping on the pants (painting the red, then cleaning up with grey) and the gap between the chest armor and belt (painting the flesh, then the brown straps above those, then you can clean up any mess on the chest plate trim with leadbelcher).

Base Shade: Agrax Earthshade – all over

I also found that Leadbelcher worked really well as an undercoat for Balthasar Gold too. So on the next three I will probably paint all the metal bits with Leadbelcher first, and then figure out which bits to paint gold or silver. Though the Leadbelcher paint also tended to be a little on the gunky side, and was my least favorite of these Citadel paints to paint with.

Agrax Earthshade – everything except flesh and hair. If careful, won’t need to reapply over Mephiston Red. Otherwise redo the Mephiston Red after the Agrax wash.

Sorry, hair and terrain are things that I usually just “wing it” and don’t take very good notes on.

VGC Bonewhite. Though I am tempted to add a touch of white to the Bonewhite before I paint the sclera (white) of the eye next time. The tiny pupil was just a few dots of black.