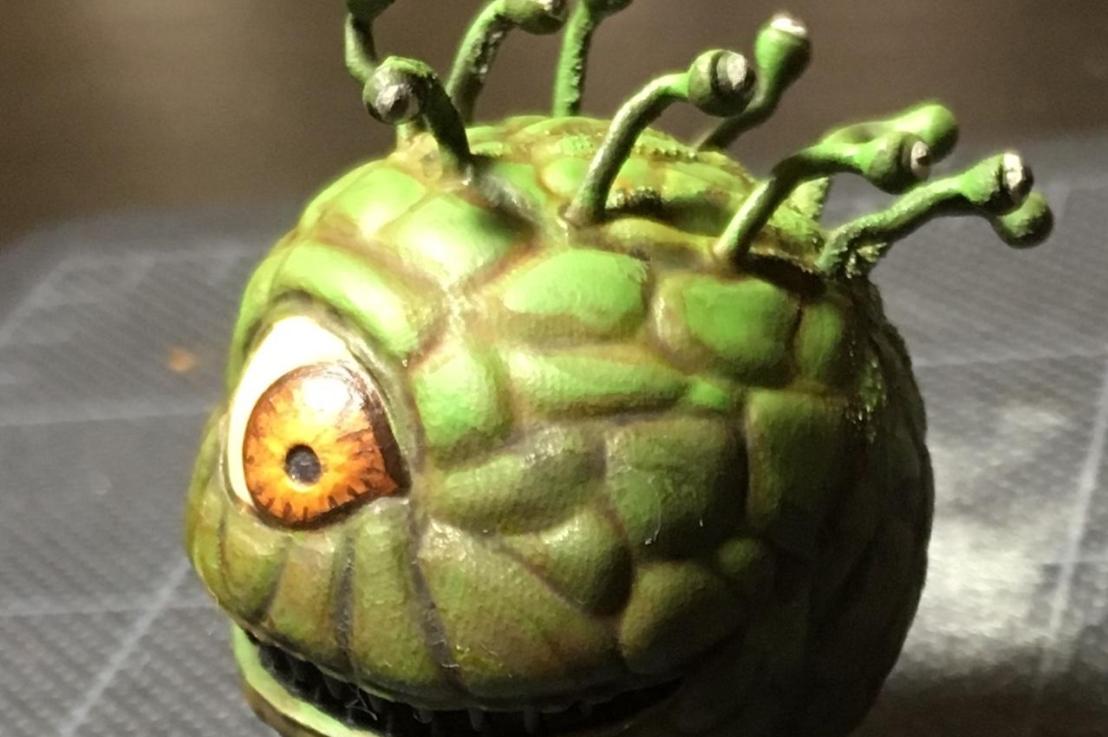 Azazel is running a miniatures challenge to encourage hobbyists to complete their models. The theme for this month is “Neglected Models”. I decided to sit this one out, as none of my models meet the criteria of “Simply complete a single model (or more if you want) that you started painting at least 6 months ago, but still sits unfinished”. Because I’ve been pretty focused on the Blood Bowl Dwarf team for the last decade, everything is in a constant state of development. I had a couple breaks, but those were quickly finished terrain pieces.

Then the other day…I’m at my desk looking across the scatter of minis and I see this: 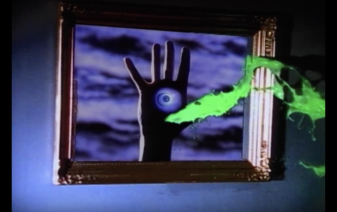 Sorry, I couldn’t help but throw a Faith No More reference in there. 😉

Back to topic, the spherical miniature is a “Beholder”. A monster which I first saw, back in Dungeons & Dragons 1st edition Monster Manual. Being an old school D&D player, I’ve got a soft spot for the those old monsters. 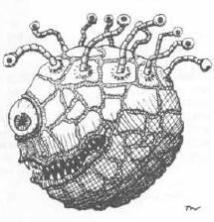 Beholders have appeared in various TSR publications since and made it into computer games, miniatures, etc. They were an original creation for D&D, and not based off of anything from mythology (like Elves, Dwarves, Dragons, etc.). For those curious about the Beholder, I’d recommend checking out the D&D roleplaying game. It is basically a levitating sphere of evil. Each of the eyes can fire different spell like effects, which make it a truly powerful creature.

That basically explains the creature, but not the mini itself. Why this one? Why is it translucent? Where did it come from?!

Quite simply, it came from Shapeways. A company that 3D prints objects in a variety of materials. Their prices are pretty high, because they are mainly in the business of making ‘prototypes’ for designers. Still, I browsed through the shops and found “Dodger”, who was making some D&D minis and other stuff. I was intrigued and decided to place an order. One, a Mind Flayer, “couldn’t be printed” by Shapeways. Not sure exactly why, but they did send along the other mini I ordered (the Beholder above). Turns out that either just structurally or maybe the material I chose, was a bit too fragile. One of the eye stalks had broken off already, and the circular base snapped in half, not long after trying to restick it to a disc with blue tac. I emailed Shapeways and let them know, that the durability of the mini was not great for my intended game use. I also emailed (based on their suggestion), the creator to let him know that there were some issues and if he would recommend a stronger material. There is also some artifact areas in the plastic on the backside. I don’t know if it will show up in photos, but it was a bit lumpy/grainy. I never heard back from the creator. Shapeways was really nice and refunded me my money, but I’m holding off on buying anything else right now. Partially because I would have to take a risk that another material is stronger, but also because I have enough to keep me occupied right now.

So I had a cool looking mini, that was a bit too fragile….and therefore it sat on the desk. And more than likely, there it would have sat for quite awhile longer. Truly a “neglected” mini, as I just wasn’t sure what to do with it.

Then the Challenge gauntlet was out, and I say ‘Hey, why not!?’. I knew it doesn’t really qualify for Neglected Mini month, but I could still play along in my own way. I also had been wanting to experiment with Zenithal Priming. Being a spherical monster, I figured he would be a really good candidate. Plus it shouldn’t take too long to paint a Beholder anyways, right? 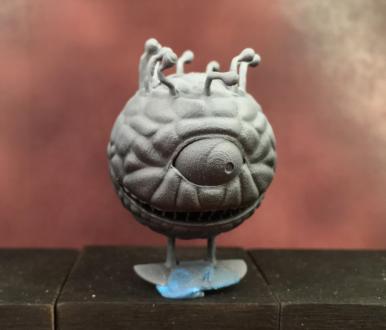 So I broke out the airbrush and primed the whole mini in black. Another day or so went by and I primed with grey, but shooting from the top at a 45 degree angle. Then hit it again directly overhead with white. That’s your basic Zenithal Priming. The idea being that the top of your mini would have the most highlights and the bottom of the mini would have the most shadows. This should reduce your painting time overall, since you’re not starting with a blank slate, slowly building up shadows and highlights.

After getting the mini fully primed, I noticed the defects, and you can clearly see the build lines in the mini above. Not horrible, but if you’re looking for a really smooth mini, like a character, might not be so great. Anyways, I wasn’t sure what color to use, and the original Monster Manual didn’t have color in the description. Green usually looks good on a monster, so why not. I grabbed Vallejo Game Color Goblin Green. Thinking I would go a bit too bright, and bring it back down with a quick wash. 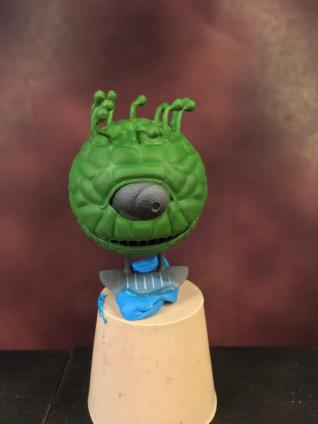 How successful was my experiment? Not very successful at all. After applying the Goblin Green, I realized I might have overdid it. The shadows and differentiation of highlights was all but wiped out by my painting job. My mistake, and I guess I should have applied a really thinned down coat to keep the gradation. It’s still slightly noticeable, but not enough.

Let’s Get it Finished!

A quick wash of Citadel Fuegan Orange, to provide an interesting contrast between secondary colors. 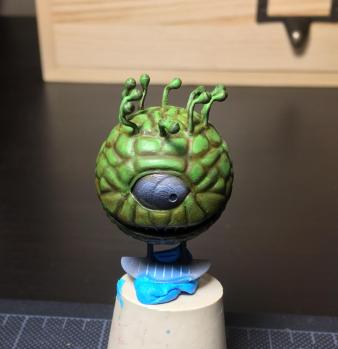 GLFFF! But what about my eye?!
Then some more highlights and a wash of Citadel’s Agrax Earthshade. Things start to take shape and the green looks more like I want it to.

Some quick image searching on lizard eyes gave me an idea for how the central eye. “Idea”, as I used similar colors, but not the actual pupil shape.

With the central eye done, I was quickly at the home stretch. It’s the first time I’ve painted an eye that large on a mini before, so that was interesting. I didn’t want a stark white eyeball, so I started with a Vallejo yellow. Then glazed Vallejo Game Color Bone White over the top. For the central eye, I used an orange and then did the edges with a brown. Both Vallejo colors, but can’t recall which ones. The brown markings were not working right at first, and I thought I had botched it. Using a wet brush I was able to draw the brown back in to my liking. First time I’ve really experimented with pushing/drawing paint using a wet brush, and that was kind of fun. The idea of wet blending two colors, is still pretty daunting though. 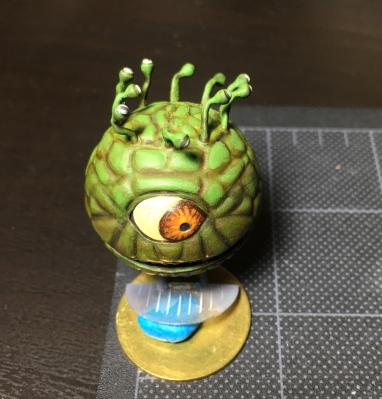 After the big eye, I knew I had the eye stalks to do, and the teeth. I could also go back and add more highlights to the chitin, add some white highlight marks to the eye, and, and, and ….

As I was typing all those “ands” to my brother in chat, the little voice in my head sounded off “You’re never going to finish the damned thing!”. That troubled me a bit. I reflected to a recent post I saw from Azazel. I had been impressed that Azazel had the courage to reach a point and just post it, saying it was done. Granted, the difference between Azazel being done with a mini and my being done, is a great divide, but it gave me the strength to tell myself I can move along.

So I highlighted the teeth with some Eshin Grey, drew some lines down the pupils of the various eyestalks and called it “good”. Given the fragility of the mini, I doubt I would bring it to the game table, and I don’t even have a D&D game going on anyways. So it can sit on my desk and remind me of the cool D&D monster from time to time.

Plus it allowed me to try out a few things, which is always cool. 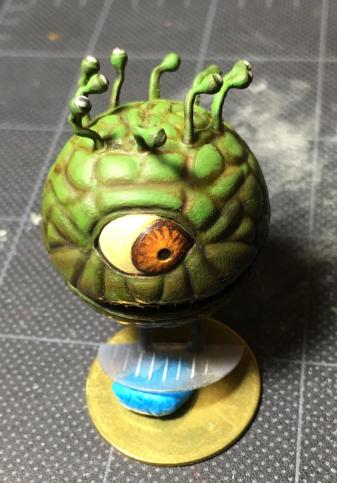 Back to the bit about Zenithal Priming….as it got overloaded, I used washes to add the shadows back in. Here you can see where the bottom half is a bit darker with more Agrax applied than the top half.

One last thing to share…I found it interesting that the 3D artist who uploaded this to Shapeways, got the model to look very closely like the original illustration from the book. A lot of his stuff looks really close to other character images. Not sure exactly how he did that, but pretty cool.

This was a good one overall, not too hard, a creature I like, testing a couple things out, and I feel reasonably satisfied with it. One… More… Mini… Done!  Thinking “OMMD” should be my new motto.

18 thoughts on “Miniature finished “The Not Quite Neglected Model””