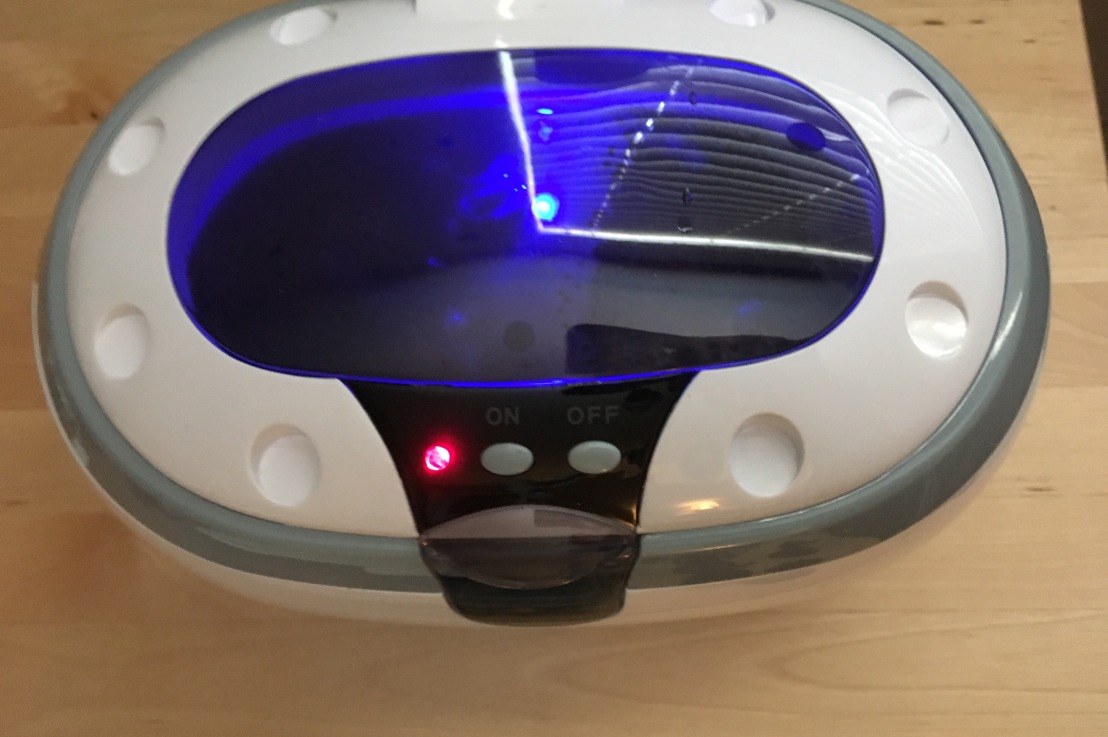 Well, this was a post I wasn’t hoping to return to anytime soon. Things could always be worse though.

I had primed some Dwarves awhile back using an airbrush (see previous blog posts) and at the time had decided to go with an airbrush primer paint labelled “Red Brown”. Since my plan was to do the Dwarves in red/gold, I figured this would help speed things along. The result was ‘Deep Chocolate Dwarves’.

“Hey Gunter, I don’t think we are going to win this year’s Fashion show!” 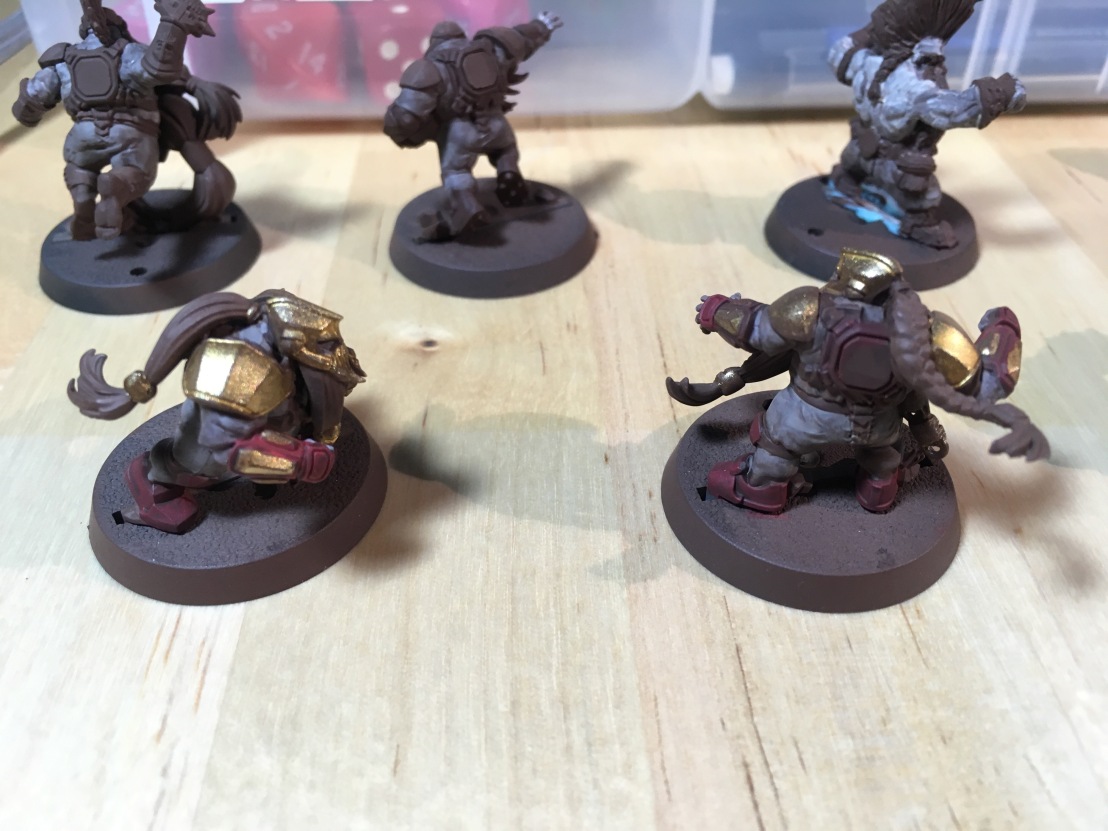 As you can see, I tried adding the gold, some red, some brown, some grey, washing with brown….but nothing seemed to look right. Finally I gave up and decided to go back to square one. Which involves “stripping”.  As in paint.

Well, I figured this would be a good opportunity to take some step by step pictures as I go, so other people will see what I consider the easiest method I’ve come across. 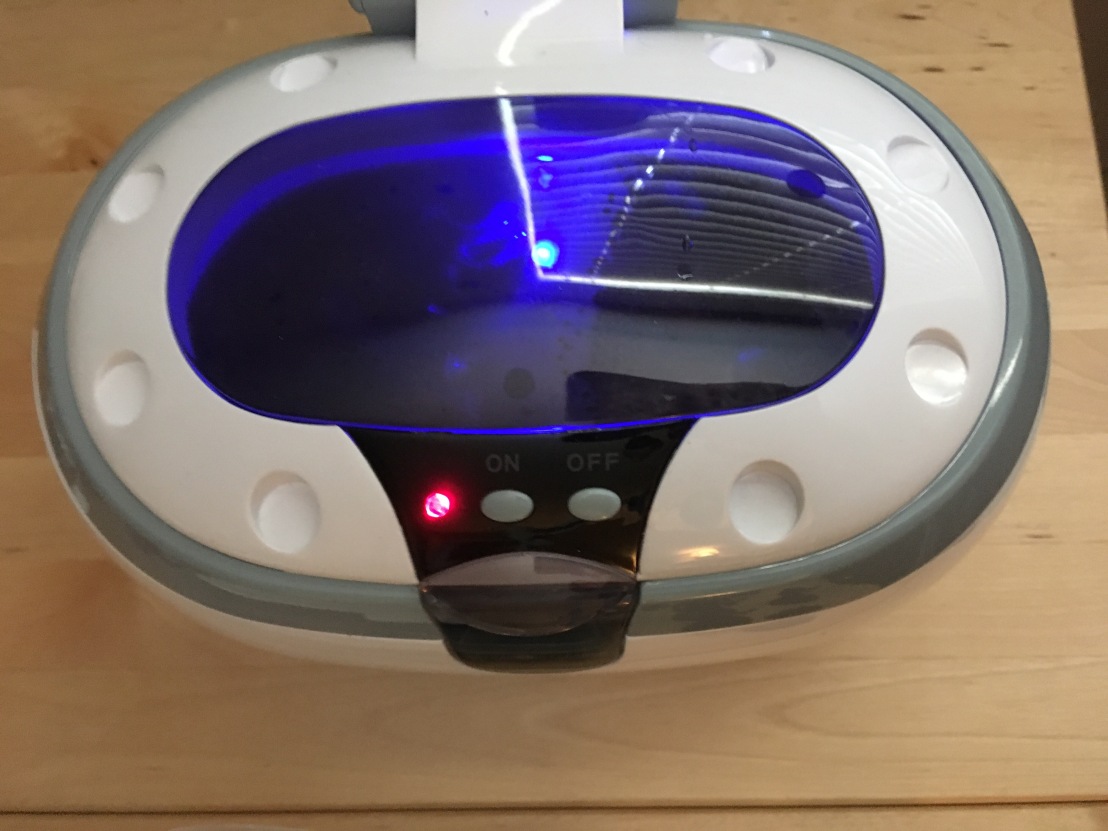 Simple enough, fill up the basket inside with your minis. I put about 8 minis in at a time. Fill the basin with Super Clean. Plug it in, and hit the “ON” button. Twiddle your thumbs. The clean cycle lasts for about 3 minutes. I hit the “ON” button again after it’s finished, and run them through 4 cycles.

Step 2 – A lil Scrubbing Never Hurt No One 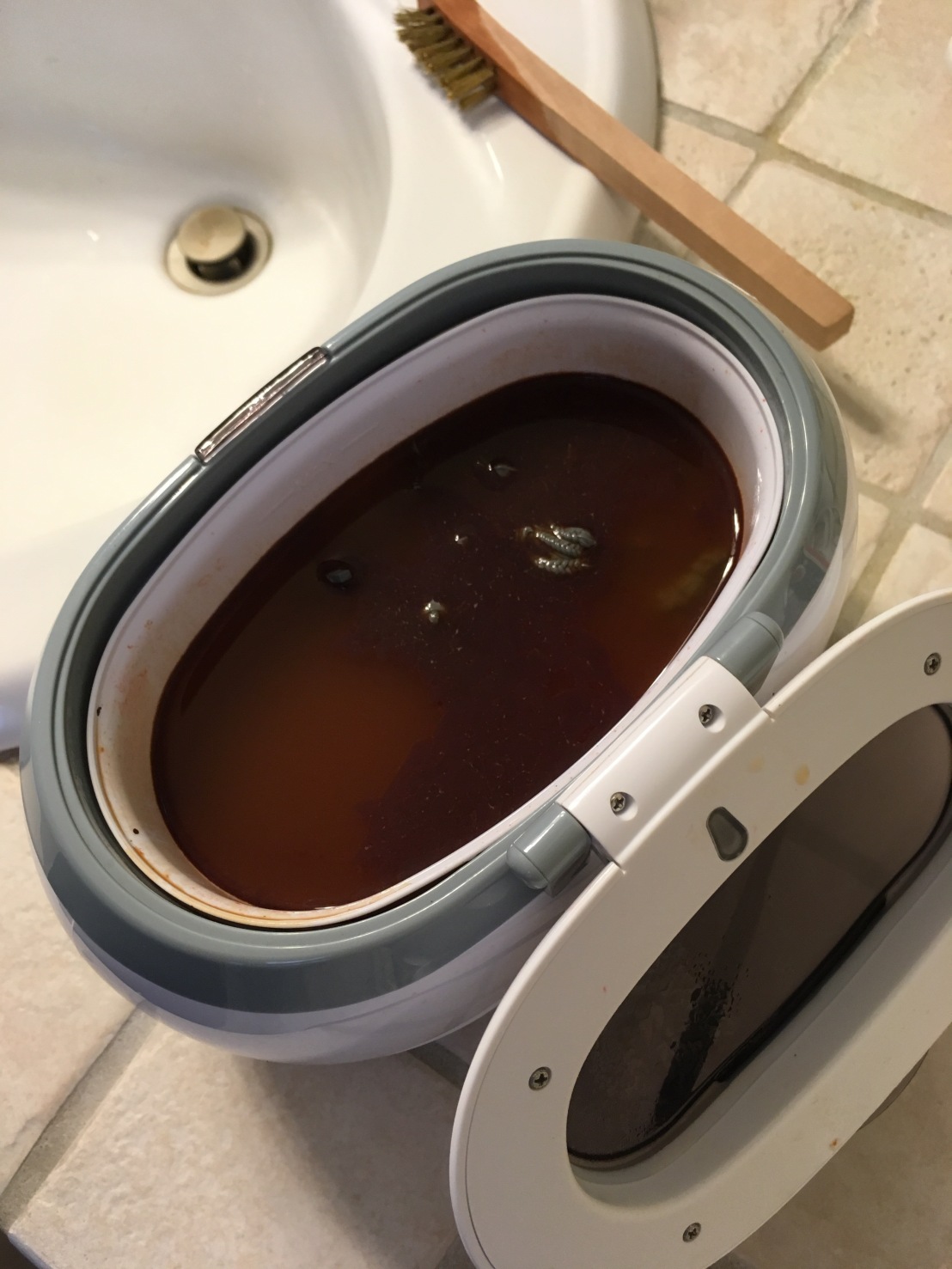 As our toddler is fond of saying “EWWWW!”. Yep, after awhile you’ll have a nice mess inside. The good news is, that’s from all that brown paint that is coming off those miniatures. In about 12 minutes time!

Don your gloves, remove the basket, drop it in the sink… 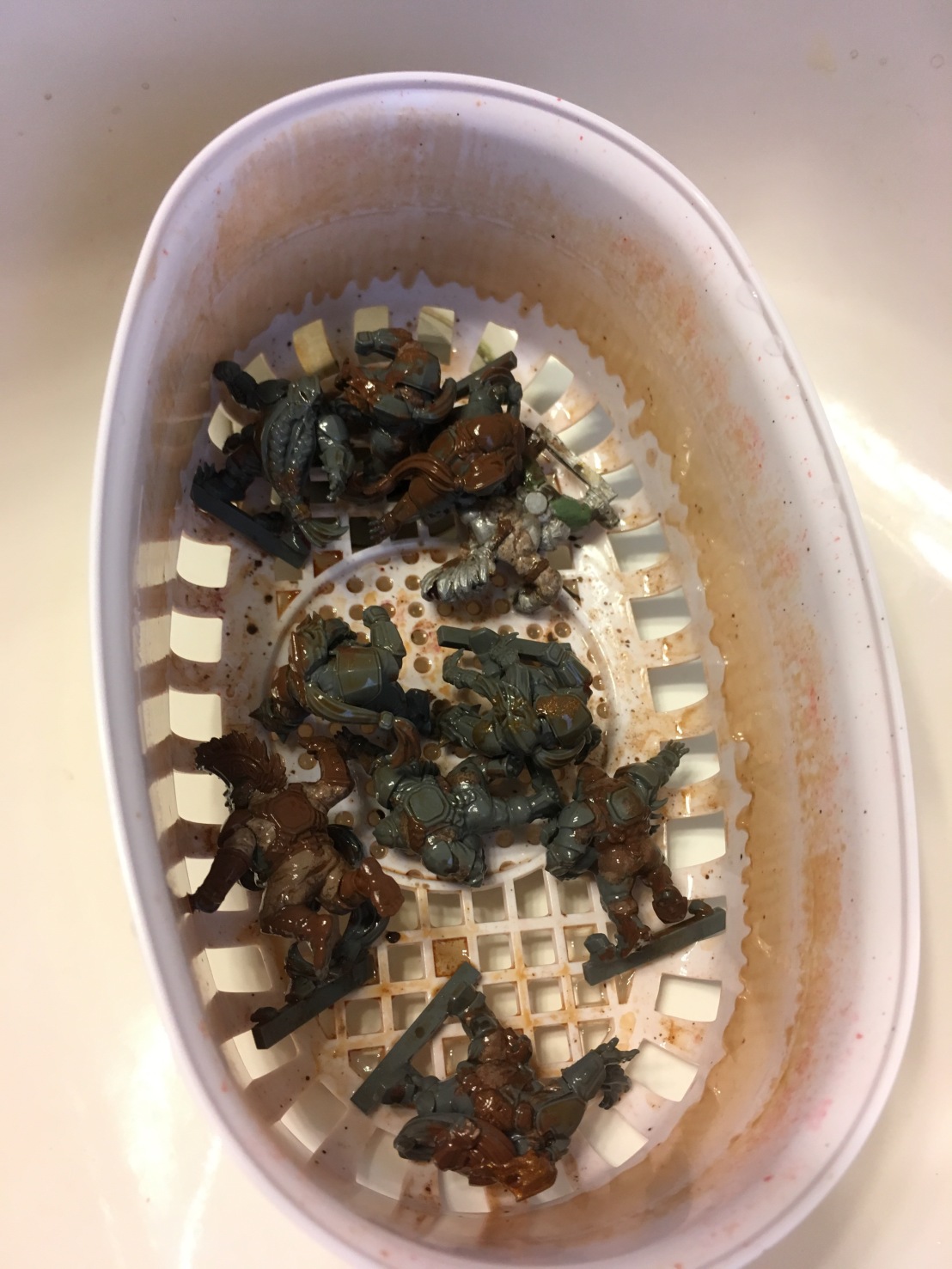 I then give each mini about a 30 second scrub. The paint will pretty much peel away. I don’t take too long on scrubbing at this point, because I want the Ultrasonic/Super Clean to do most of the work for me. So a quick scrub, and then back in the bath.

Again, let them run for 4 cycles. 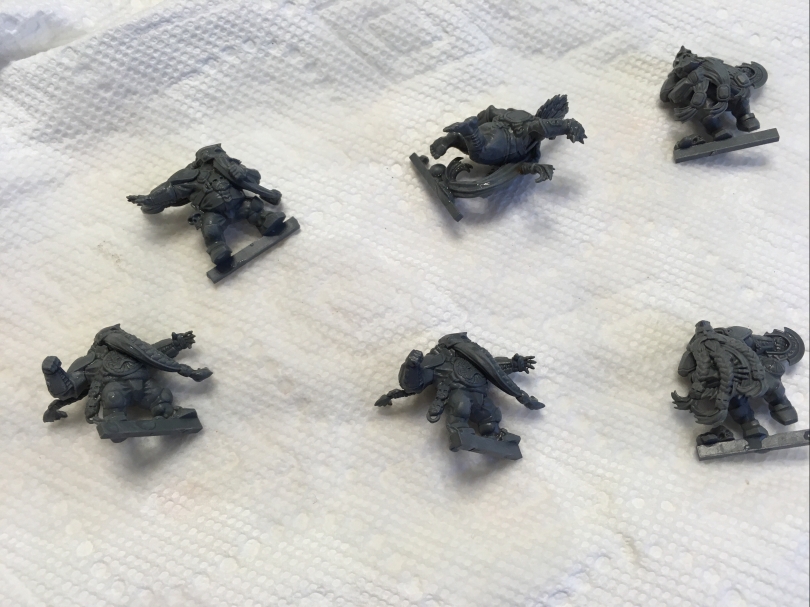 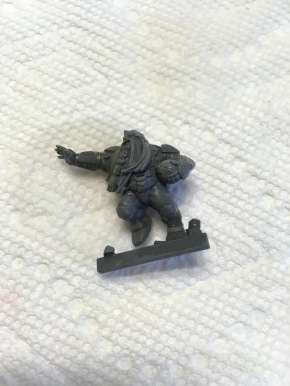 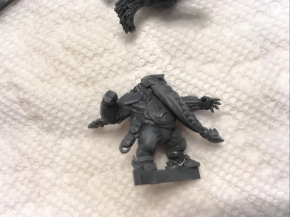 So after taking them out of the last bath, scrub and rinse with some water. Scrubbing should only take about 30 seconds, and really at this stage, all the paint should be off. You can see how clean they get in just about no time at all. Also, some parts will sometimes loosen, which I was really hoping for, as I later found out that some of the Dwarf beards were a pain to paint under.

I ended up prying some off, with mixed results. I don’t know if I’ll regret that later, as some of the little pegs inside snapped. I guess I could pin if I’m still worried later.

Here’s an example of one mini that didn’t come completely clean with scrubbing: 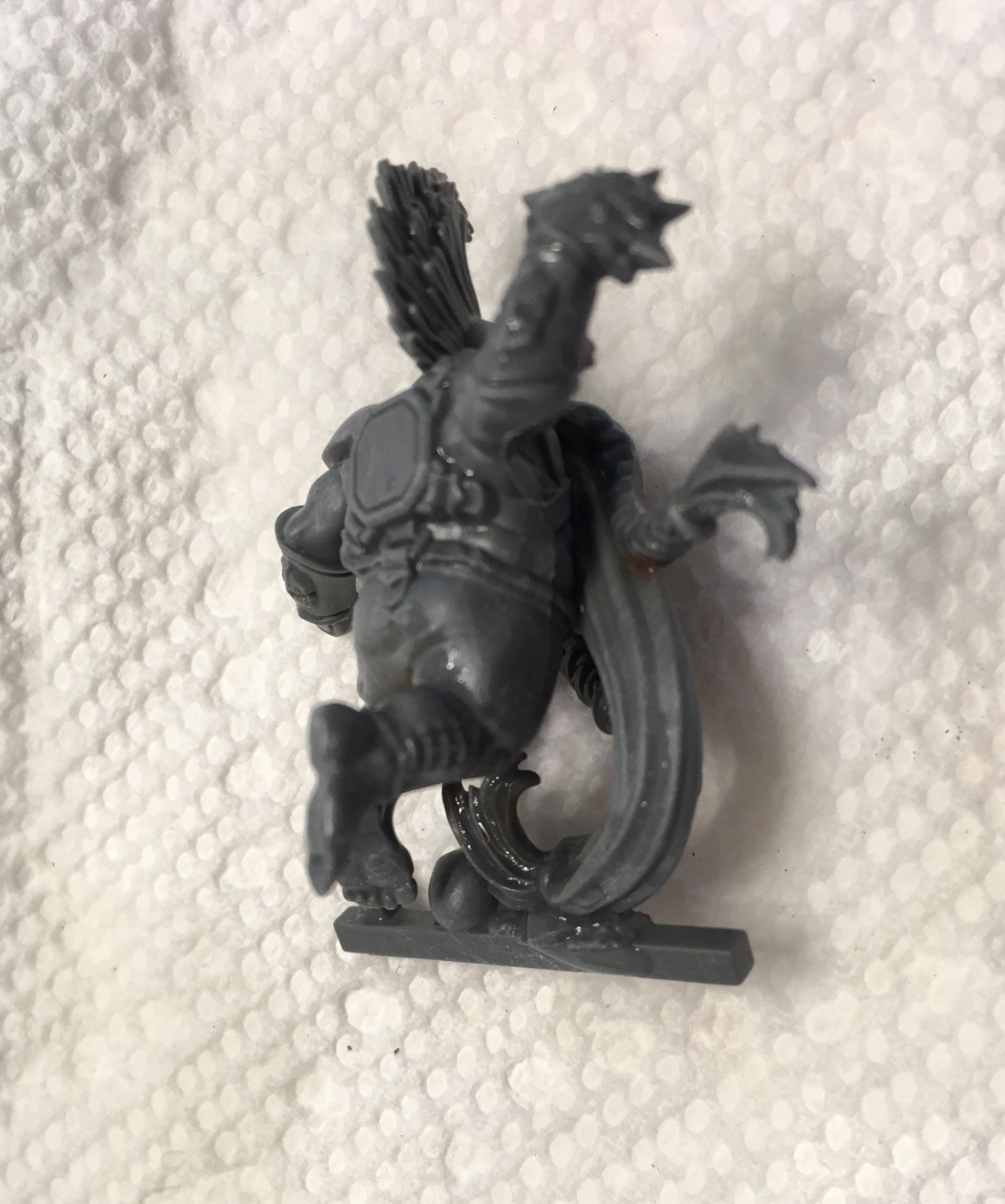 There is one small brown spot where the two beard pieces are meeting. Likely the next primer coating will totally cover it. I’ve also found that taking an exacto knife or other pick like instrument, you can usually pry the paint out of those spots pretty easy. I think it’s best to do it while things are still wet, not sure what happens if it is allowed to dry.

Clean up of the bathroom sink, etc. was pretty easy and the Ultrasonic Bath speeds up the time immensely.

The two warnings I will impart:

Wear nitrile gloves, as I’ve heard that Super Clean can burn your skin. I haven’t run into it yet, but I’m not going to risk my dainty digits.

Super Clean can melt some plastic. I’ve had Super Clean melt the paint to some of the early Mantic Deadzone miniatures. Oddly, others were just fine. But when it did happen, it turned the miniatures into a complete mess, that I wouldn’t be able to salvage with further painting.

Edit: one more mention, afterwards I pour the Super Clean back into its bottle. I use a funnel and a mesh screen to filter out the larger paint chunks. But you can reuse the stuff over and over, and it never seems to make a difference. It just looks dirtier over time.